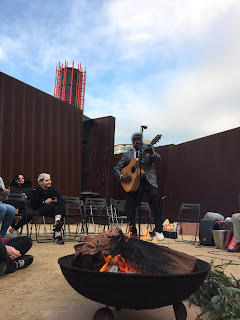 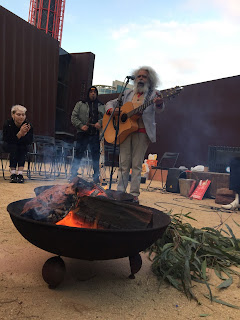 Was lucky to be in Melbourne on Saturday for a rusted-on winter treat.  On a cold and grey day with a howling south-westerly wind, I was expecting the courtyard between ACCA and the Malthouse Theatre to be a wind-tunnel or vortex.   As it turned out, the afternoon’s festivities “Dhumba Narbethong” – an outdoor program to complement the “A Lightness of Spirit is the Measure of Happiness” exhibition indoors at ACCA – met the weather halfway, as aided by, the impressive South Face of ACCA, aka the Colossus of Rust, corralling the wind into a merely bracing northerly.

Without sun or shadow, the monumental architecture of ACCA and the adjacent red tollway tunnel smokestack receded into a matte background and utilitarian shelter for a stage.  On “stage” – a campfire in the round but with a tacit backstage quadrant to the north-east – were some remarkable performances.  Songs and stories that were intimate and relaxed – but on another level, commanded a vortex to infinity, up and through that edge in the sky between the blue-and-white wisps and the giant slate-grey sheets held mesmerisingly at bay.  The fourth wall as sheer matte-ness, and a glimpse of the monumental form of one attenuated moment.

Born 1964. Uncannily similar to Kath&Kim's Marion, I'm single, live alone, with (the ghost of) one cat.